In Laos rivers are everywhere. They run like long legs down the length of the country, carrying life on their broad backs, travelling swiftly in places, and in others, slow. Life on the banks of the Nam Ou in Northern Laos is fluid and slow, vigorous and languid in turn, changing with the seasons. For children there’s ample time to play and for adults, time enough to discuss the minor calibrations of the day, which is configured around the rituals of washing and harvesting. For the water buffalo, there’s no work but swatting flies.

The appeal of river life draws travellers in large numbers to tiny Nong Khiaw and Mong Ngoi Neu, villages 100km upstream from the northern capital, Luang Prabang. In January and February, when the Nam Ou is at its lowest, tourist numbers peak, and when the waters swell in June, the number of tourists ebb. This is the time the river renews itself, absorbing into its stream the reams of water that uncoil from the mountainside, gathering like snakes among river rocks, fingering into the cliffs, boring caves deep enough to accommodate whole villages. The shores, where corn and beans grow during dry season, are inundated, and when the waters recedes, a shimmering shelf of silt is revealed, ready to coax the sap to rise in another season of crops.

Life in the more remote villages of the Nam Ou has changed very little in the last century: boys are eligible to marry only after they have mastered the art of building, and the boat builder is one of the most important citizens in the village. As soon as boys are tall enough to hold their fathers’ fishing nets clear of the sand, they learn to cast, and even the smallest child, male or female, knows how to hold his or her head above water while diving with hands outstretched to grab thick tufts of vivid green river weed that their mothers transform into crisp savoury sun-dried snacks, encrusted with tamarind juice, sesame seeds, and slices of tomato and garlic. 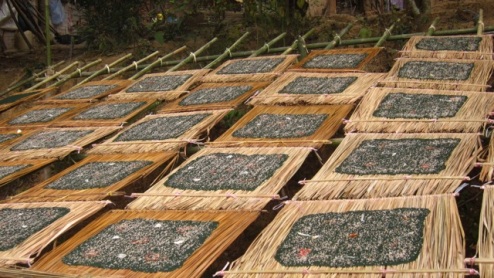 A good deal of the river weed prepared in the villages ends up on the tables of tourists who pick idly at the local delicacy between sips on dewy bottles of Beer Lao. They watch the sun set from the broad decks of riverside cafes after a day at the herbal spa, swinging in hammocks, cupping the latest Stieg Larsson novel. Meanwhile, younger, more vigorous travellers attempt afternoons ‘tubing’, or hire bicycles to ride through the stunning karst scenery.

Hip young Laotians in jeans ape the behaviour of backpackers, nicking off for picnics by the river, carrying plastic bags of sticky rice, crates of warm beer, and CD-players haemorrhaging pop. Their glee at having escaped the watchful eyes of their parents is palpable. Such secretive play has long been outmoded in the west, where everything is permissible. 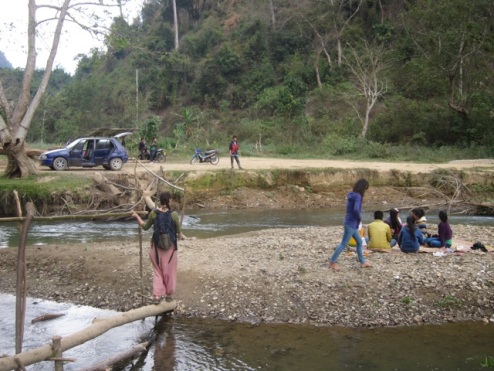 teenage Laotians, picnicking by the river with friends and the national brew, Beer Lao

The capacity of the village children to content themselves with shredding palm fronds and rolling bike tyres through dusty yards is admirable. No play stations, no mobile phones, no plastic tat. Their toys are the toys our grandparents played with, all those years ago, before the world wars, before Laos became the most bombed country in history.

In our family-run guest house a modest young woman with a thick black ponytail and a charming seven-and-a-half-month waddle (her first child!) smiles blithely while she prepares coffee, pancakes and eggs for her hungry guests; sings while she sweeps; and laughs when she watches her guests depart under the burden of rucksacks. She is beautiful and good natured and relaxed.

Her English is limited but she knows enough to explain to me and Richie how to spread the seeds of the Jamaica cherry onto paper before drying them in the sun, and sprouting them in the shade. She is curious about the lives of the people she meets, but appears to have no desire to be anywhere other than where she is, in the moment, awaiting the arrival of her first child and the return of her husband in the evening. She is pleased when he brings home a Mr Bean DVD. The sound of her pleasure makes me smile because it’s genuine, and Mr Bean is a goose!

There are a surprising number of French travellers staying at the guest house, they stay up later than the other guests, talking volubly in the courtyard. The sign on road promises ‘wifi gratuit’, which is all well and good when it works. ‘Grandpapa’, who will soon hold his first grandchild in his arms fancies himself a gentleman, and he is. He will not pose for Richie’s photo until he has changed into a clean pressed white shirt, his best trousers and a belt. He sits on the veranda of the cafe singing outdated French ditties to the accompaniment of a 5-string guitar. The French and French-Canadian girls applaud his efforts and pretend to swoon. It’s hard not to succumb to his charm.

Eventually, the river that brought us here to Nong Khiaw takes us away. So it is in life. And if you’re lucky, like Richie and I, the ride is scenic, long, and relaxing. Six hours downstream the Nam Ou joins the Mekong. We blend our course with the larger river and make for the slow boat landing on the peninsular in Luang Prabang, which is, by all accounts, a charming city – “too charming” a scruffy Irishman warn us. You can’t win! The river is everywhere, and it’s flowing to the sea.

waiting for the boat to Luang Prabang