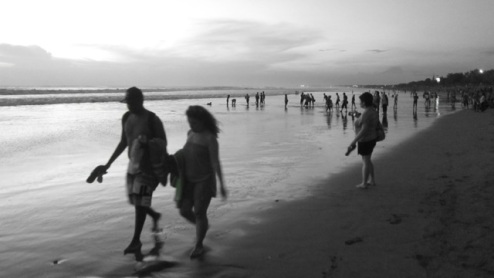 The three brightest stars in the sky above Kuta Beach are not stars at all, they’re aeroplanes. They orbit the sky, once, twice, before descending. I watch as they approach, becoming larger and more fanta-coloured as they draw near.

The aeroplanes drop like muscular angels to the earth, chasing one another up the runway, lifting the skirts of their wings like frisky schoolgirls, teetering on the narrow lip of land that separates runway from sea. Finally, they come to a standstill before the crooked elbow of the disembarkation ramp, disgorging another fat helping of tourists into the swollen body of the Denpasar Bali airport.

To balance out the equation, three aeroplanes take off. They enact the dance in reverse, lifting their gaze to the horizon, hunkering down, and launching themselves at the sky. As they claw their way up into the stratosphere their blunt bodies shed vortex after vortex of spent air molecules. The sound falls like a meteor shower on my head, mingling with traffic to create a peculiarly Balinese symphony. The change in air pressure as the planes fly overhead leaves me flattened and subdued. 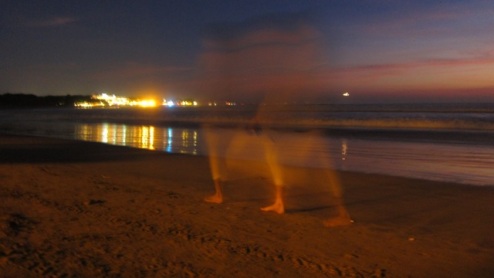 an aeroplane coming in to land at Denpasar Airport 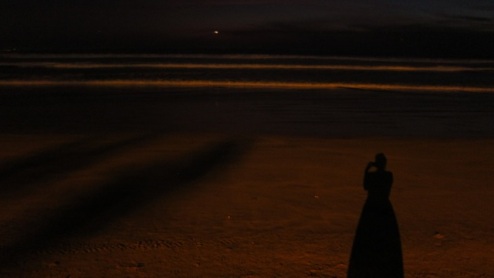 In contrast to the antisocial airport, the beach is full of human-friendly shapes: surfers, mandorla shortboards and the pleasingly symmetrical silhouette of traditional Balinese fishing boats, jukung. Lifeguards in Baywatch buggies ply the shoreline. Dogs on leads buck their owners in a comic play of walker and walked, whilst higher up, on the tree-line, the well-heeled make ready for a performance of gamalan, sipping cocktails with names more redolent of the Carribean than this overpopulated strip of beach that lies terrorised and trembling under the flight path of the Denpasar Bali airport. 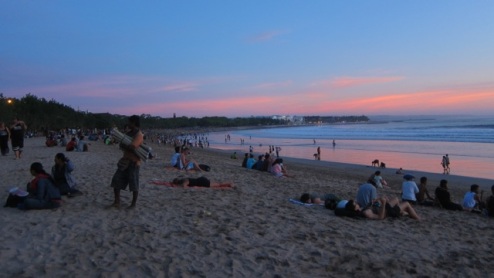 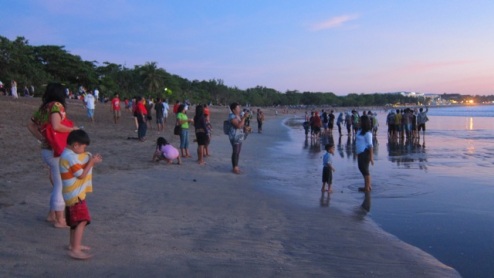 The human magnitude of the beach is astounding: surfers and their girlfriends; honeymooners; gangs of local youth who have come to perve on bule in bikinis; hawkers selling beer; photographers; wedding parties; families; schoolgirls. Amongst the masses there are tetchy parents, who at this late stage in the day have surrendered, like cornered sloths, to the devilish antics of their children: I watch as one embattled father pivots in the sand, permitting his 2-foot son to fill his pockets, hair, underpants and ears with as much sand as his eager hands can gather. END_OF_DOCUMENT_TOKEN_TO_BE_REPLACED

The Many Temptations of Dali Old Town

Dali, in China’s Yunnan province, is a pleasant place to connect and re-root. There’s plenty of sunshine, good food and a multitude of comforts: hot showers, western loos, pizza, cake and coffee. Invasive foreign species like Brits, Aussies, Japanese and Canadians have long found a toehold in Dali, grafting themselves onto the cultural landscape. Yunnan is, after all, China’s most biodiverse province.

The melange of east and west, old and new works magic on Chinese tourists, who flock from all over the country to experience a neat and palatable version of their history. Trailing like unruly schoolchildren behind garishly dressed Bai cheerleaders, they traverse the city form south to north, parting enthusiastically with money for broiled Dali cheese, roast chestnuts and bolts of blue and white hand-dyed batik. Chinese tourists with oversized Nikon cameras startle hippy travellers, who make faces behind cocked pints of beer. “5 kwai a photo,” the reluctant models joke. 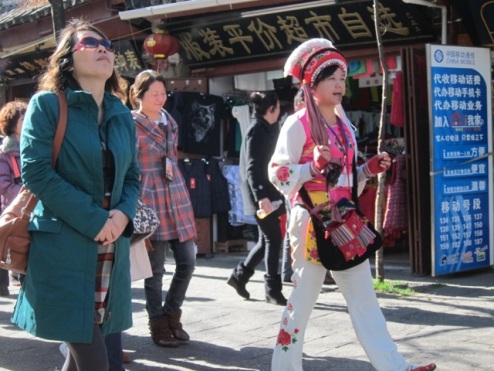 Bai tour guides, representatives of one of the region’s ethnic minorities

END_OF_DOCUMENT_TOKEN_TO_BE_REPLACED 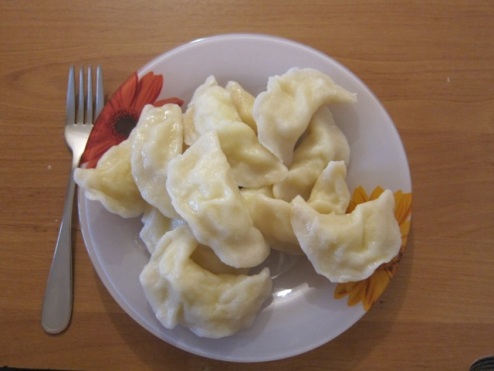 Our friendship with Andrey began over coffee and zinger burgers. He was in the same boat as us, waiting for a visa for China. He’d seen our antics in the queue at the Chinese embassy – blue lips, dancing-to-keep-warm and our utter bewilderment at being spoken to in Russian – and took pity on us.

Within three days of meeting Andrey and his wife Anna, we were sleeping on their lounge room floor, waking up to pancakes and rice pudding, playing games of chess with their sons, accompanying the family on shopping excursions to the bazaar, fishing in the river and swapping banter in broken Russian and English late into the night. Anna was keen to brush up on her ‘modal verbs’, and thankfully Sam was able to oblige – 5 years of teaching English in China pays off!

There were no limits to the lengths Anna and Andrey would go to help us: we needed to find new accommodation – no worries; visit to train station to collect tickets – too easy; finding a ride across the border from Almaty to China in five days time – piece of cake. “All you need to say,” Andrey intoned slowly and clearly, unable to hide his amusement at our English reservedness, “is ‘Andrey, please help me’.”

Together, Andrey and Anna devised a rigorous regime of cooking and eating, encompassing all their most beloved national dishes, to keep our minds and bellies distracted from the tedium of waiting for visas. Seven days later, we all agree that we’ve had a wonderful time, and that we need to go on a diet! END_OF_DOCUMENT_TOKEN_TO_BE_REPLACED

Balkan letter to a friend… 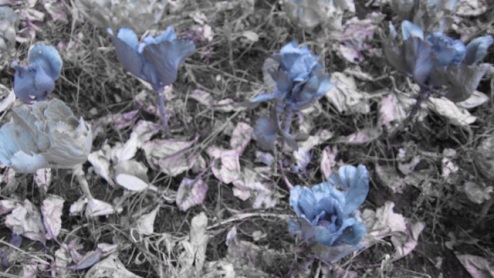 Transylvania is sweltering! Indian summers are all well and good when Jim Morrison is elegising, but in reality they wear a girl down. It’s borderline 40 degrees and not a drop of rain in sight. I was hoping the ‘murky forests’ you spoke of would be fruiting with wild mushrooms, but it’s not so. Perhaps in a few weeks or a month? Rain is predicted for tomorrow but I remain skeptical. I’m hoping for a cracking Queensland-fashion thunder storm to break the heat and rip its belly out. The leaves on the trees are talking about autumn, but nobody’s listening.

A solid 3 months since rain. The corn crop has withered in the fields and farmers have harvested hay only once, not twice, as they normally do. The hayricks are still standing. They lend the countryside a rustic sculptural elegance. Did you ever read The Worm Forgives the Plough? Don’t suppose there’s much cause for building hayricks in your line of work? But if there were, this would be the first place to look for advice. The apples here are small and tangy, there’s more than you can eat, but where’s the cider?

We passed the Carpathians on the train on wednesday. Splendid. END_OF_DOCUMENT_TOKEN_TO_BE_REPLACED